I must have been 5 or 6 years old when my best friend told me during gym class that Sinterklaas (the Dutch version of Santa Claus) didn’t exist. I didn’t want to believe it, but he kept insisting. “It’s your parents who are giving you those gifts,” he said. I kept being in denial until I got home and asked my parents about it. When they confirmed, I lost my faith in Sinterklaas. It was then and there that I stopped believing in claims of a higher power if not proven by science. In other words: I’m an atheist.

It’s difficult to know that you are the only one you can fall back on, that you’re alone in this world, without some higher power looking over your shoulder. No guardian angel, no deity, no force that’s with me; I have to do everything myself. My father knows both sides of the story: as a devoted muslim he felt comfortable that God was always watching over him, but when he abandoned his faith, so did His watchful eye. He tells me life was easier as a Muslim, because his faith in God would always help him when he would face difficulties. Now, he has to face them all by himself. My father still goes to a mosque sometimes to feel the spirituality of the place, whereas I go for the magnificent architecture, which I like to photograph. Spirituality is meaningless to me; it’s like telling myself Sinterklaas still exists when I know he does not. I have no use for it in my life.

Now that I am living in Korea, I sometimes feel out of place when spirituality is involved. However modern it may look on the outside, Korean society still has a big place for spirituality. Soothsayers and palm readers play a big role in many people’s choices in life, Buddhist temples and churches are still frequented for guidance and prayer, and multiple times a year rituals are performed to honor deceased ancestors. The connection to our ancestors can be quite strong, that is why searching in newspaper archives, on obituary websites, and talking to the family can help us stay true to where we come from, for some people. All this spirituality means nothing to me. I think that the soothsayers and palm readers are a bunch of frauds that make a good living off the uncertainty of people, I frequent Buddhist temples and churches only for the amazing architecture and scenery I love to photograph, and I have no need for honoring my dead ancestors because they are dead and can’t hear me anymore.

Although spirituality hasn’t any meaning to me, I can’t escape it due to my Korean wife’s family. My wife used to go to a palm reader in the early stages of our relationship. She was shocked to hear the palm reader say that we would break up a few years later, at which I got angry and told her she shouldn’t see those people anymore. The problem resolved itself. When the deadline of the prophecy passed, our relationship was stronger than ever. She hasn’t gone to one of them since. I don’t have any problems with my mother-in-law going to a Buddhist temple every week. Being an atheist doesn’t necessarily mean that you think other people should be atheists as well. Religion and spirituality is something personal that everybody should figure out for themselves. No, the most frequent exposure to spirituality is the ritual to honor the dead that I have to go through multiple times a year. There is charye (??) on New Year’s Day and Chuseok (??) in the Fall, and because my wife’s grandmother died a couple of weeks after Chuseok, we need to repeat the whole ceremony again on the day she died (which is called Jesa or ??). My wife’s grandfather died on another day still so there’s another day for that too. 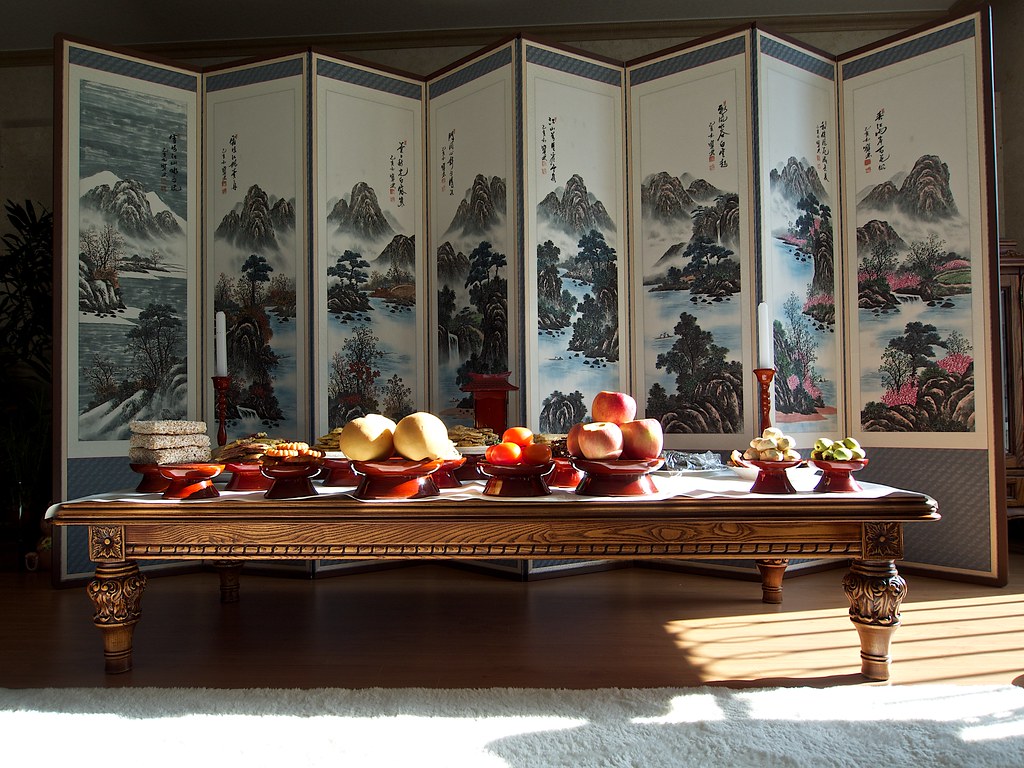 The ceremonies are almost identical (I haven’t found a difference yet, but then again, I could be wrong): It starts with preparing a lot of food and putting it on a table in a predetermined way, organized by color and/or type of food. Nobody seems to know because every time we are arguing what goes where and shifting around the food. Several times we need to refer to a printed piece of paper with the set up on it to get it right. Then my father-in-law and his brother change into their nicest suit and the ceremony begins. Well, not immediately because my father in law, who needs to lead the ceremony, always forgets what must be done. He’s studying a book with instructions and pictures intensively before we start. During the ceremony he constantly reaches for it too, because he’s not sure about the next step. While not having the need for any spirituality, I still participate in all the bowing and circling a cup of rice wine (Jeong Jong, ??) around incense three times. There is also a period just before the final bow when we shouldn’t look at the table so the spirits of our ancestors wouldn’t be disturbed while eating the food from the table. Though I think the reason you shouldn’t look is that you won’t see that there’s actually nothing going on at all. We awkwardly wander around in the living room until my father in law says it is time to continue the ceremony.

So why participate in all this if I’m so skeptical, you might ask. The answer is the same as when we celebrated Sinterklaas during my childhood. After I stopped believing in Sinterklaas we didn’t stop celebrating it. Partly it was because of my little sister, who still very much believed, but also when she stopped believing we continued celebrating. Although it shifted to celebrating Christmas, which is even weirder to celebrate as an atheist when you think about it. I remember we would really look forward to the gifts we would receive and preferably open all at once. Now that I’m an adult and living in Korea I’m in a whole different situation. I don’t celebrate Sinterklaas nor Christmas anymore and I don’t need all the rituals and spirituality. However, when people express their gratitude when I know the proper way to bow in a funeral, or help my in-laws setting up the table and participating in the ceremony, I know I still do it for the same reason as celebrating Sinterklaas when I was just a kid. I’m still doing it for the gifts, but I’m not on the receiving end anymore and that makes it even more rewarding.

Don’t get me wrong, if you believe in a god I still think you’re wrong, but it’s just not worth it disrupting Christmas for. Like I found my way to deal with spirituality you have found yours. People throughout history have been wrong or right on numerous issues and have solved them in any number ways, including the really ugly ones like suppression and violence, and good ones like dialogue and arguing. I like to choose for the latter rather than the former, so unless you are one of those people who advocate the former, I think we’re going to do just fine.

What do you think about this?
Do you feel lucky with the tags? Give it a try: atheism, atheist, Buddhism, Christianity, christmas, god, religion, Sinterklaas, south korea, spirituality, the Netherlands